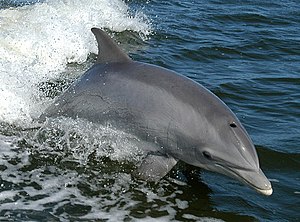 Dolphins are part of the whale family and are mammals. They can be between one and a half and four meters long. The Orca is the biggest dolphin and can even get to be eight meters long. The most well-known dolphin to humans is probably the bottlenose dolphin. Many people think that dolphins are fish. Three things show that they are not fish, but mammals: They drink milk from their mother, they need to breathe air, and they don't have scales, but skin.

How do dolphins live?

Dolphins eat fish and crabs. They are fast meat-eaters. They have a special organ in their head: the "melon". The melon sends an echo out, that bounces off things such as prey. That's how dolphins know what's close to them.

Dolphins, like other whales, live in groups, or pods. They communicate with their echo. With dolphins, only one half of the brain sleeps at once. The other half controls the dolphin’s breathing. Also, one eye stays open and looks around.

Dolphin mothers carry only one baby at a time. Like other whales, they spray milk into their baby’s mouth because the baby has no lips to suck. After a few months, the pup can look for its own food. It stays with its mother for about six years.

What are the biggest threats for dolphins?

The biggest danger for dolphins is fishing nets. They can get stuck in them and drown. Mostly the fishermen don’t want to catch dolphins, but tuna. In some places like Japan, though, people eat dolphin meat. Other dolphins die because people catch them. They don't survive being caught because of the way they are being transported or die as captives of humans. There are also soldiers who train dolphins to fight in the water or to find mines. Most dolphins are caught to serve as attractions in zoos. A natural danger is the depth of the water or mud on the ocean floor. Then they are unable to receive their own echo. As a result, it can happen that they get washed up. Its natural predators are orcas and sharks. Also, dolphins can catch diseases or get infected by a fungus.