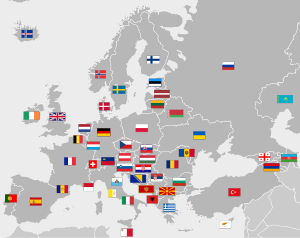 This is a map of Europe and all the European flags.

Europe is a continent. It has over 40 states. The Atlantic Ocean borders it to the North and West, in the South it is bordered by the Mediterranean Sea. In the East, Europe is connected to Asia. The border is a big mountain range called the Ural Mountains.

The European continent has a lot of coastal landscapes. It has a lot of islands, peninsulas, and inland seas. An inland sea, just like the North Sea and Baltic Sea is part of the ocean that is surrounded by a lot of land. In contrast to China, there has only been a couple of Empires, for example, the Roman Empire. This is maybe because of all the islands, peninsulas and inland seas, where it is easier to defend yourself against enemies.

Since the modern age, so since about 1,500 years ago, Europe had many different colonies on other continents. A colony is a piece of land that had been bought conquered by another country. Because of this, almost the entire world once belonged to Europe. That’s why in South America people mostly speak Spanish, and in Australia, English. However, between 1920 and 1960, most of the countries lost their colonies.

In Europe people speak a variety of different languages. If you count Russia to Europe, then Russian is the most spoken language that Europeans learn as their mother tongue. In second place is German. English is the most used language in Europe. Most languages come from Latin.